Recently I improved the performance of GoAWK – my AWK interpreter written in Go – by switching from a tree-walking interpreter to a bytecode compiler with a virtual machine interpreter.

While doing that, I thought it’d be interesting to see how much the performance of Go itself has improved over the years.

There are many ways programs written in Go have gotten faster: the Go team and external contributors have improved the compiler and have optimized the runtime, garbage collector, and standard library. Below is a comparison of GoAWK’s performance when compiled using each released version of Go from 1.2 (the earliest version I could download) to 1.18 (which is in beta now).

I tested by running GoAWK on two AWK programs which represent different extremes of what you can do with AWK: I/O and string processing, and number crunching.

First, countwords, a string processing task that counts the frequencies of words in the input and prints out the words with their counts. This is the kind of thing that’s typical for an AWK script. The input is a 10x concatenated version of the King James Bible (which I’ve used before for performance comparisons) Here’s the code:

The second program is sumloop, a tight loop that adds the loop counter to a variable a bunch of times. This one’s not really a typical use of AWK:

The timing numbers in the first chart are the time in seconds on my x86-64 Linux laptop (best of three runs). I’ve also included a chart of the GoAWK binary size for each Go version.

I used a Python script to run them all and measure the timings. Here are the charts (or as a table if you prefer): 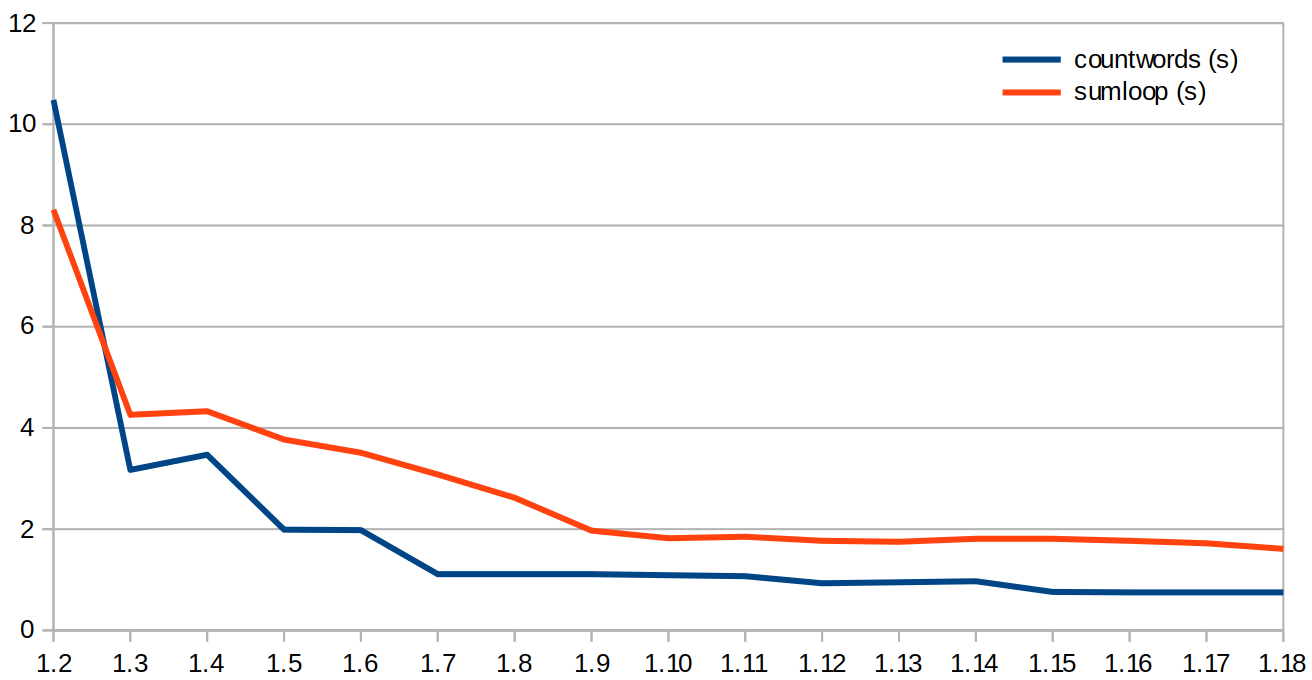 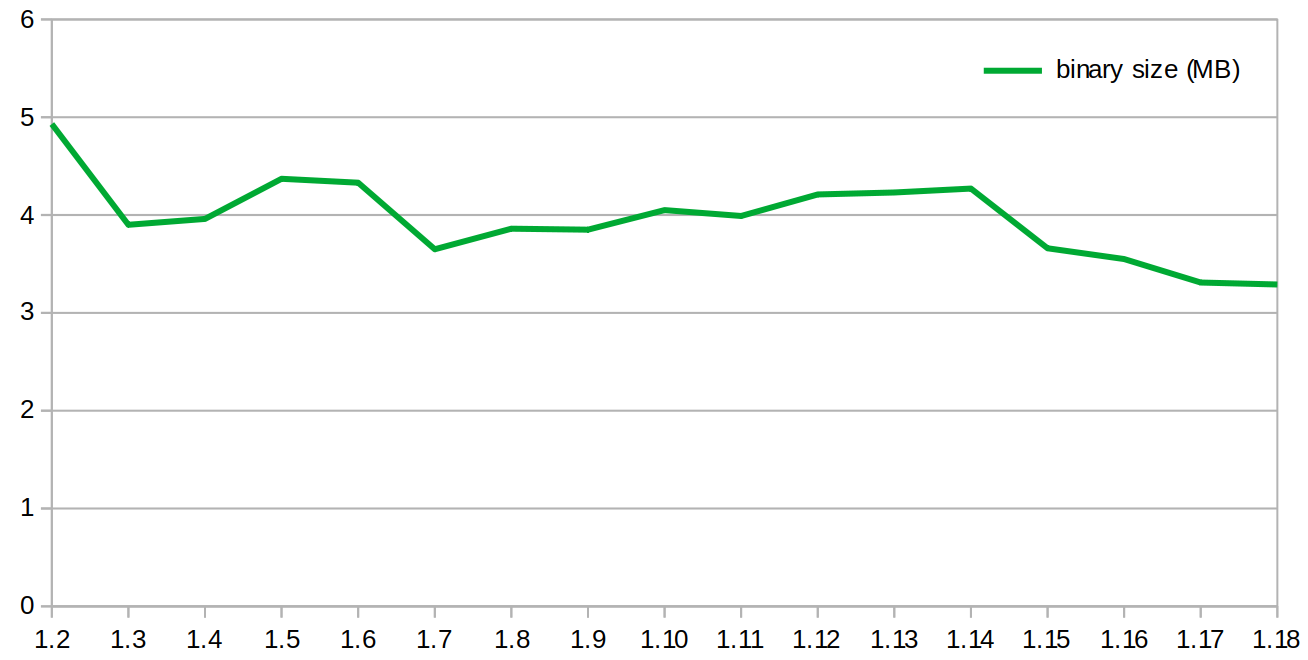 I guess there was some low-hanging fruit they picked way back in Go version 1.3! The release doc says there were significant changes to the runtime, garbage collector, and how stacks were handled. Then there are steady improvements for countwords up through Go 1.7 and for sumloop up through 1.9. After that there are very gradual improvements up to 1.18, where we are today.

A recent improvement was in version 1.17, which passes function arguments and results in registers instead of on the stack. This was a significant improvement for GoAWK’s old tree-walking interpreter, where I saw a 38% increase in speed on one microbenchmark, and a 17% average speedup across all microbenchmarks.

Interestingly, with GoAWK’s new virtual machine implementation, there’s no noticeable improvement from the change to pass arguments in registers. This is because the virtual machine uses a big switch statement to dispatch the different opcodes, but very few function calls. This is in contrast to the tree-walking interpreter, where every expression required a (recursive) function call to eval, so it did get large performance gains.

I’m looking forward to someone improving the performance of Go’s regexp package, which is quite slow. Regular expressions are used heavily in AWK scripts, so this would make a big difference when using GoAWK for real-world scripts. Maybe I’ll have a crack at this myself sometime.

Overall, countwords is now about 5x as fast as it would have been with Go 1.2, and sumloop is 14x as fast! (Though I first released GoAWK when Go was already at version 1.11, so it wasn’t around for the huge early gains.)

For an actively-developed compiler like Go, it’s cool to be able to get performance improvements just by waiting and letting others do all the hard work. :-)

I’d love it if you sponsored me on GitHub – it will motivate me to work on my open source projects and write more good content. Thanks!