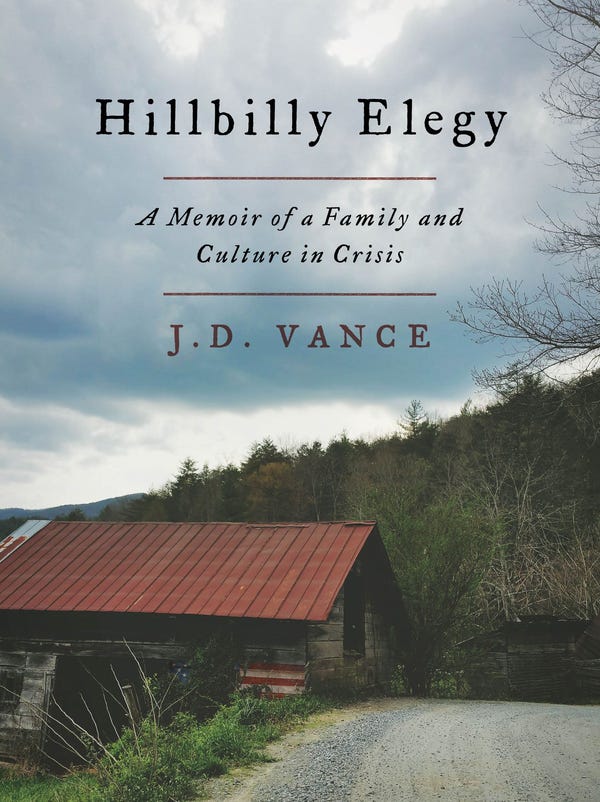 I just finished reading Hillbilly Elegy by J. D. Vance, and can’t recommend it enough – it definitely deserved to be a New York Times bestseller. It’s a great yarn, but it was also eye-opening and provocative.

The book is an autobiographical account by Vance (who’s only 35) of his journey from a rough, rough upbringing in hillbilly America to a university education ending with Yale Law School. I appreciated the empathetic writing style from the introduction, where he speaks of those he grew up around and identifies with: “Americans call them hillbillies, rednecks, or white trash. I call them neighbors, friends, and family.”

Vance’s grandfather struggled with drink, his grandmother was as tough and as rough as nails, and his five-times-married mother struggled (and I believe still struggles) with hard drug abuse. Those around him growing up weren’t much different. The stories Vance relates give insight into the cycles of poverty, addiction, and mistreatment that he grew up around.

One of the stories – I didn’t know whether to laugh or cry – was one he tells about his grandparents. His grandpa had become an alcoholic, and after one particularly bad night of drinking, Vance’s grandma (or “Mamaw”) told her husband “if he ever came home drunk again, she’d kill him.” Vance relates that “Mamaw, never one to tell a lie, calmly retrieved a gasoline canister from the garage, poured it all over her husband, lit a match, and dropped it on his chest. When Papaw burst into flames, their eleven-year-old daughter jumped into action to put out the fire and save his life. Miraculously, Papaw survived the episode with only mild burns.”

Perhaps more miraculously, his grandparents stayed together. Vance explains how once they had grandchildren, his grandparents actually got their act together, and both his grandparents were huge positive influences in his life – more so than his mother, who was in and out of relationships and often in trouble for drug abuse. In his teenage years, his grandma helped encourage him through high school (with rough words but a loving heart).

It’s clear from his story that Vance is a thoughtful conservative, though the book is definitely his own story and is not particularly political. But as many other reviewers have noted, Vance’s memoir goes a long way to explaining why so many people from America’s Rust Belt not only voted for Trump, but were positively pro-Trump. Here was a politician as rough (and divorced as many times) as some of them were, bringing a message of hope to people whose jobs had been sent to Japan and China. Whether Trump delivered on those promises is another question, but the slogan “Make America Great Again” definitely has a different ring through the eyes of Vance’s story.

As we’ve seen recently, there are significant racial issues afflicting America, but there is also class discrimination. Reading this book makes you aware just how large the divide is between “the elites” and the working class. Race isn’t prominent in the book at all, but one of the times he does touch on it is when recounting how he started reading more widely in his late teens. One book that really struck a nerve was The Truly Disadvantaged by sociologist William Julius Wilson: “I wanted to write a letter and tell him that he had described my home perfectly. That it resonated so personally is odd, however, because he wasn’t writing about the hillbilly transplants from Appalachia – he was writing about black people in the inner cities.”

After high school, Vance was terrified thinking about the unstructured college experience, “from feeding myself healthy food to paying my own bills.” A cousin and Marine Corps veteran encouraged him to consider going into the military. He decided to go for it, and it turned out to be one of the best decisions of his life.

The structure and discipline he learnt in the Marines – and even the basic life skills he’d missed out on growing up – set him up for university and work. “The Marine Corps assumes maximum ignorance from its enlisted folks. … When I came home from boot camp with my fifteen-hundred-dollar earnings deposited in a mediocre regional bank, a senior enlisted marine drove me to Navy Federal – a respected credit union – and had me open an account. When I caught strep throat and tried to tough it out, my commanding officer noticed and ordered me to the doctor.”

After his time in the military, he wanted to go to law school, and was “sufficiently committed to going to Yale Law that I was willing to accept the two hundred thousand dollars or so in debt that I knew I’d accrue.” What he didn’t realize at first is that being poor meant he’d be able to get a scholarship covering almost his entire tuition. “It was the first time being so broke paid so well.” And ironically, due to the need-based aid, “Yale wasn’t just my dream school, it was also the cheapest option available.”

He discovers at Yale that he’s literally outclassed. He and a friend named Jamil are the only two of his classmates from a poor background. Everyone else came from “intact families who never worry about money.”

In any case, he worked hard at law school, and in his final year is invited to a dinner with recruiters from a top Washington D.C. law firm at one of the fanciest restaurants in town. “At first I was too nervous to drink. But I finally mustered the courage to answer yes when someone asked whether I’d like some wine and, if so, what kind. ‘I’ll take white,’ I said, which I thought would settle the matter. ‘Would you like sauvignon blanc or chardonnay?’”

Vance continues, “I thought she was screwing with me. But I used my powers of deduction to determine that those were two separate kinds of white wine. So I ordered a chardonnay, not because I didn’t know what sauvignon blanc was (though I didn’t) but because it was easier to pronounce.”

Incidentally, that is one of the few incidents from Vance’s upbringing I can relate to: I didn’t go to restaurants growing up, and my wife jokes because I still have a thing about the French not pronouncing half the letters in their words.

All in all, I highly recommend the book. I read the written version (ask me to borrow it!), but the audio version is read by the author, so you get even more of a feeling it’s him telling you about his childhood.

My wife listened to the book on Audible a couple of years ago, and had talked about how good it was. One thing she noted – and I’ll reiterate – was how it has a lot of bad language. It’s usually when he’s quoting his grandma or uncles, and doesn’t seem at all out of place. Still, not a book for listening to in the car with kids.

Printed or audio, go and read it – you won’t be disappointed!