This time a year ago we were deploying new code to Oyster.com using a completely custom deployment system written in C++. And I don’t mean real C++; it was more like C with classes, where the original developers decided that std::string was “not fast enough” and wrote their own string  struct:

It’s not our idea of fun to worry about buffer sizes and string lengths when writing high-level deployment scripts.

Then there was the NIH distributed file transfer system — client and server. And our own diffing library, just for fun. All very worthwhile things for a hotel review website to spend time developing in-house! :-) 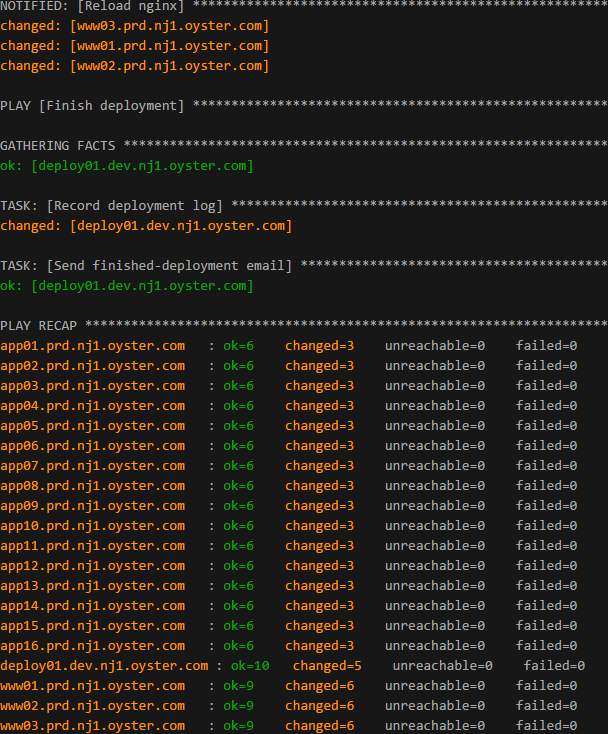 Sarcasm aside, this wasn’t a joke: we replaced more than 20,000 lines of C++ code with about 1000 lines of straight-forward Ansible scripts. And it really did restore our sanity:

Some teams within TripAdvisor use Chef for server setup (and other tools like Fabric for code deployments). We also looked briefly at Puppet. However, both Chef and Puppet gave us a very “enterprisey” feel, which isn’t a great match for our team’s culture.

This is partly due to their agent-based model: Chef, for example, requires a Chef server in between the runner and the nodes, and requires you to install clients (“agents”) on each of the nodes you want to control. I think this picture gives a pretty good idea of the number of components involved: 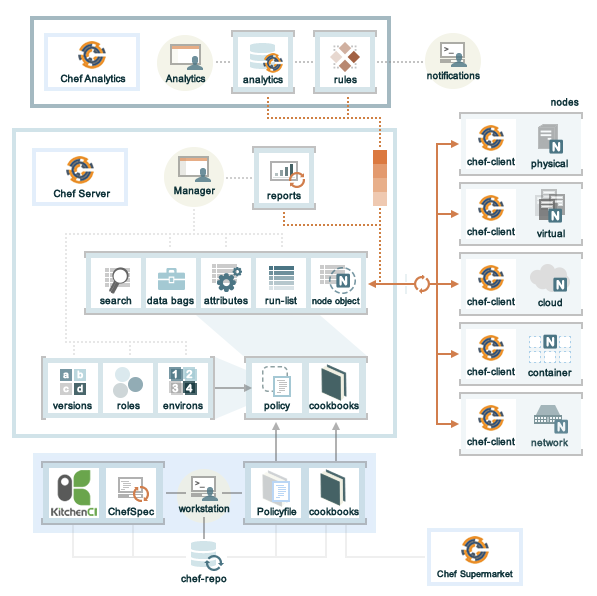 I’m sure there are advantages and more power available to systems like Chef, but we really appreciated the simplicity of the Ansible model. Two things especially wooed us:

Ansible itself is free and open source and available on GitHub. But they also provide a fancy web UI to drive it, called Ansible Tower. It’s nice and has good logging and very fine-grained permissions control, but we found it was somewhat tricky to install in our environment, and as developers it didn’t gain us much over running a simple command.

Our thinking is that in a larger organization, where they need finer-grained permissions or logging, or where non-developers need to kick off deployments, using Ansible Tower would pay off. 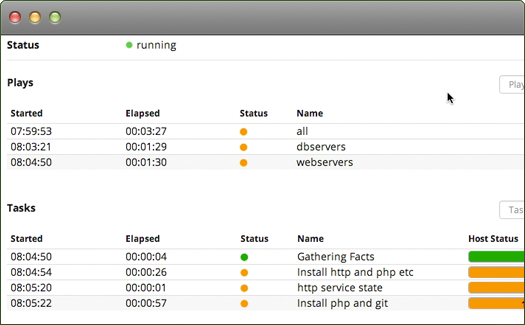 As noted above, Ansible has a very simple order of execution, and its model is kind of a cross between declarative (“get my system configuration into this state”) and imperative (“do this, run this, then try this”). Our site deployment involves some system configuration, but is mostly a series of steps that “orchestrate” the deployment. Here’s more or less how it works:

To show you some example Ansible code, step 3 (and step 5) use the following code:

As you can see, Ansible uses fairly straight-forward YAML syntax. In the above code, Ansible runs these tasks against our 8 “app_b” hosts in parallel — a simple but powerful concept.

For a given “play” such as the above, each task is executed in order — we really appreciated how it doesn’t try to outsmart you in terms of how and when things run. The only exception to this is Ansible’s handlers, which are tasks run at the end of a play, but only if something “notified” them. For example, in our deployment, handlers are used to restart our nginx servers when the nginx config file changes.

You’ll see there are a lot of {{ variables }} used here: each task line is actually a Jinja2 template string that is rendered against your current set of host variables. This makes it very easy to modify settings which change depending on environment (staging, production, etc). It also separates playbooks from user-specific data, meaning settings aren’t hard-coded in playbooks and folks can share them much more easily.

We deploy solely to Linux-based machines (about 50 nodes), and Linux is where Ansible started and where it excels. However, we have something of a Windows history, so it was interesting to learn that as of August 2014 (version 1.7), they started adding support for managing Windows machines — this is done via Powershell remoting rather than SSH.

In short, what sold Ansible to us was:

Pre-Ansible, we dreaded our 28-manual-step deployments. Post-Ansible, it’s almost fun to deploy code, and the focus is on the features we’re deploying, instead of “what’s going to go wrong this time?”. So I hope you get the chance to try Ansible! And no, we weren’t paid to link that…