Summary: After seeing Adrian Siekierka’s “Reconstruction of ZZT”, I wrote a program to translate his Turbo Pascal code to Go. This article describes my Pascal-to-Go converter and my (not exactly complete) Go port of ZZT.

I’m not “a gamer”, but one of the games I enjoyed playing as a teenager was Epic MegaGames’ ZZT – an old text-mode DOS game that came out in 1991. Even in its time the graphics were far from revolutionary … but the reason ZZT did so well, and still has something of a cult following, was because of the world editor (that came free, even with the shareware version).

Here’s what the original shareware “Town of ZZT” title screen looked like:

The world editor had a scripting language called ZZT-OOP, where the “O” in OOP referred to ZZT’s “objects”, which are programmable game characters or robots. So people created thousands of their own worlds and shared them – hundreds of which are downloadable and even playable online at the Museum of ZZT, a kind of archive.org for ZZT worlds.

The Reconstruction of ZZT

The original source code for ZZT was lost in a computer crash, but there have been various attempts over the years to recreate the game in other languages, including C++, a partial implementation in JavaScript, and even an accurate reimplementation in Rust. And Adrian Siekierka is the author of Zeta, a specialized DOS emulator just for running ZZT.

In March 2020, Adrian published his Reconstruction of ZZT, a reverse-engineered recreation of the Pascal source code that, when compiled with the original Turbo Pascal 5.5 used by ZZT, compiles to a byte-for-byte identical .EXE file. I for one find that an amazing feat! See the original Hacker News discussion and the article Adrian wrote later about how he did it.

He has since gone further, and created libzoo, a portable C reimplementation of the ZZT game engine with a permissive license for use in other ZZT ports.

A while back I started trying to write a version of ZZT in Go, but after making a tiny bit of progress, I gave up – it seemed like too big a job for a side project. However, when the Pascal reconstruction came out, I had another (ahem) go.

I enjoy tinkering around with interpreters and compilers, so I wanted to see if I could write a program to convert Adrian’s Pascal reconstruction to Go semi-automatically. So I wrote a not-very-complete Turbo Pascal parser, and a converter that takes the Pascal syntax tree and tries to write it out with Go types and syntax.

Go’s structure and declaration syntax actually has quite a number of similarities to Pascal, so this made the overall structure of the converter pretty straight-forward. For example, take a small Pascal function in OOP.PAS:

Almost identical. To keep the converter simple, I’ve opted for a more literal translation of the Pascal, rather than trying to produce idiomatic Go – my thinking was that making it idiomatic Go is too hard to do programmatically, and I can always clean that up later.

Note the use of Go named return values to match Pascal’s use of the function name as the return value. I converted the integer sizes literally to avoid bugs, so this returns an int16 rather than a plain int.

Pascal allows you to declare arrays that start at at any index (not just 0), and in practice they often start at 1. Hence Flags[i] in the Pascal version and Flags[i-1] in the Go version.

The most difficult thing – and something I barely automated – was the differences between Turbo Pascal pointers and strings and their Go counterparts. I made the converter convert all string types to plain string, and then fixed up the breakages manually.

Pascal’s var parameters (its way of doing “pass by reference”) turn into pointers in Go, but of course in Go you need to explicitly dereference them when you assign their values. So this Pascal function:

Becomes this in Go:

I used go build -gcflags="-e" to build the converted Go, so as to print all errors rather than just the first few, and outputted the results to an errors.txt file. Initially this file had over 800 errors in it. By the end of my automated translation journey, it had only 33 – which I then fixed up manually.

The source code for my Pascal to Go converter is at github.com/benhoyt/pas2go. I started by building the lexer and parser, and output the parsed original source (the orig directory) as pretty-printed Pascal to the parsed directory. I did a diff between those two directories to determine whether my Turbo Pascal parser was correct.

Once I’d finished the parser, I moved on to the converter. This is not the most elegant code I’ve ever written; I just wanted to get the job done. In particular, it mixes up trying to figure out types with outputting the Go source code – if building a real transpiler, I would separate these into two phases and build the “types” data structures first.

Pascal’s handling of integer data types is quite different from Go’s. Go is very strict and doesn’t do any automatic number type coercion. I couldn’t find a good online reference for how Turbo Pascal actually did such conversions, but between the Free Pascal documentation and trying things in Turbo Pascal 5.5 running in DOSBox, I think I got most of the rules figured out.

Pascal seems to promote to integer (int16) when you do math operations, and they’re automatically promoted or truncated if needed on assignment. So there are a lot more explicit conversions in the Go version, such as this code from ELEMENTS.PAS:

Ends up with a bunch of int16() conversions in Go:

Once the semi-automated conversion was done, it still had dozens of Go compile errors. The first step was getting it to compile without errors. I moved the Go code to its own github.com/benhoyt/zztgo repo and systematically worked through the errors.txt file, fixing issues as well as removing less important source code (sound functions).

Once I got it to compile, I had to add in the video functionality. It currently uses terminal “graphics” via tcell. To get it to look like real ZZT, you have to adjust your font and terminal colours to match the old DOS ones. Here’s what the zztgo version looks like (pretty close, right!): 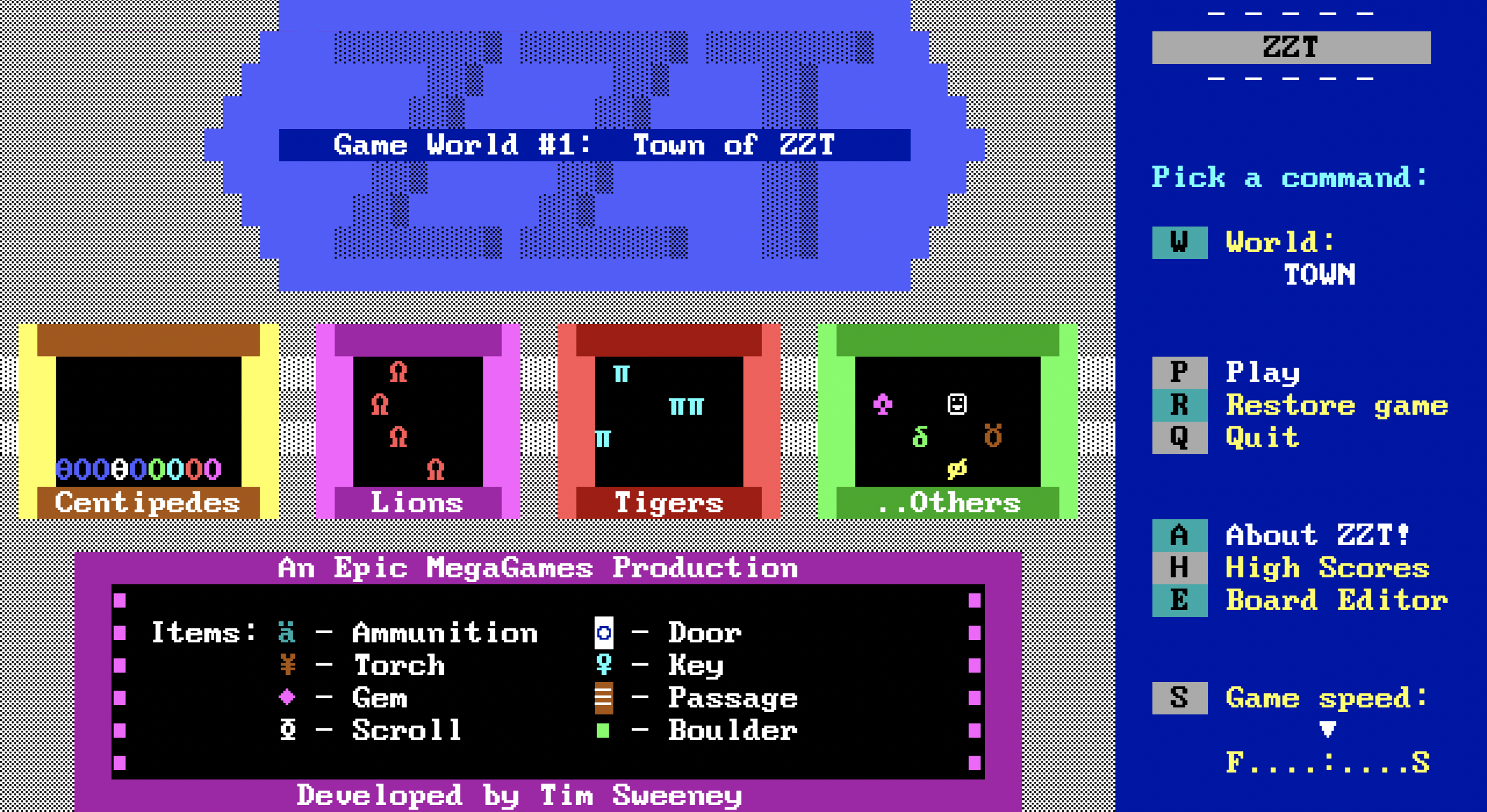 I also had to write ZZT world serialization routines – the Turbo Pascal version just loads the binary structures directly into memory (you just assumed little-endian and packed structures in the good old days).

To run it yourself: install Go, clone the repo, type go build, and then run ./zztgo. If you want to make it look a bit more authentic, you should install an IBM EGA font and adjust the line spacing to zero. On macOS you can use this Terminal settings file.

Where to from here?

Unfortunately, I’ve run out of time to spend on this project. Most of the gameplay is in place, and it seems reasonably playable, but if you want to fork it and take it further, go right ahead! What I know is missing or broken:

But I thought I’d release it as is – enjoy! I definitely had fun implementing the Pascal-to-Go converter and seeing the gameplay come to life.